He is Chief Scholar at the US-India Policy Institute, Washington DC (since 2012) and President, Centre for Research and Debates in Development Policy, New Delhi. He Was a Chief Economist at the National Council of Applied Economic Research, New Delhi (1994- 2012). He also worked as Senior Research Fellow at the Food Policy Research Institute, Washington D C 2008 -10.  He was advisor (under a committee setting) to the Indian Prime Minister during 2004-6 and the Ministry of Home Affairs, Government of India during 2010-11 in the areas of inter-state relations and inclusive development policy reforms. He was also nominated to the 13th (Indian) Finance Commission by the Finance Ministry, Government of India.

Most recent work has highlighted serious consequences to the marginalized communities of India; to ensure that they are not excluded from the democratic process of the General Elections (2019). Most voters from the deprived communities found their names missing in voter’s lists all over India. Many are categorized as ‘not-Indian-citizen’ in certain types electoral rolls and official documents. All India initiatives are underway to ensure over 60 million excluded Indian adults get enrolled in the voter’s lists in 2019. This work is in full swing right now in India.  The following publications will highlight these issues well:

In his various roles in academics and in policy think tanks, Shariff has led several teams working on economic modelling, forecasting and in building indices to measure growth and development. He has built a strong network of experts working on inclusive growth, human development and social indicators across the world. During his stint at the NCAER and now at USIPI, Shariff has led teams where multi-disciplinary sector specialists have worked together to frame policy using experiences and learning from across the globe and then help administrators and bureaucrats administer the same. Shariff also had led teams that then enable constant measurement, evaluation and monitoring of state intervention in various sectors.

Shariff has served as advisor to the Indian Prime Minister and is the main author of the now well-known Sachar Committee Report, the Home Minister of India, the Planning Commission and similar high-level policy institutions. His research focus includes poverty and inequality, human development, gender, labor markets and demographic dividends, social sector budgetary analysis, micro-impact of economic reforms and review of safety net public programs.  Shariff is a trained demographer and econometrician. He has extensive exposure through conducting large scale sample surveys and semi-structured semi-anthropological qualitative studies. He is a development economist with specialization in human development, poverty analysis and social protection.  He has worked mostly in India, but also in Africa South of the Sahara, Bangladesh, Pakistan, Maldives, Sudan, Togo, Uganda, South Asia and Central Asia.

Shariff has lectured at several institutions across the world, the latest being at the Harvard University’s School of Public Health on November 2, 2017. He has been a member of several high-level advisory committees of the Government of India including the Assessment and Monitoring Authority, set by the Indian Planning Commission to review the progress of Government’s Developmental and Safety Net Program. He was also member of a committee on Assessing the Efficacy of ‘Conditional Cash Transfers’ in India, set up by the United National Development Program, and a member of the Advisory Committee on Innovation support for Social Protection: Institutionalizing Conditional Cash Transfer Programmes of the Planning Commission.

Sharif was selected as one of the India Today Magazine ‘faces of millennium (Economist)’ in January 2000 issue; and one of the 25 identified in the Outlook Magazine’s Alternative Power List (23rd April 2007 issue) as a recognition of my ability to influence public policy in India.  He has published 8 books and over 50 research articles in refereed journals and seminar proceedings. He is a panelist on various Indian TV channels and has been interviewed and quoted in magazines of high repute such as the Times of India, Hindustan Times, New York Times, The Economist, Financial Times of London, La Monde, Paris, Washington Post, India Today and Outlook.

Shariff is committed to democracy and strive to educate and uphold the ideals and principles of equity and justice in a diverse world. 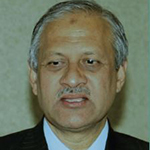 An accomplished I. A. S officer for 34 years, he served as the Secretary to Government of Karnataka, Department of Minority Welfare, Haj and Wakf. Earlier he served as the Secretary to Govt. Department of Personnel and Administrative Reforms; Managing Director (MD) of Bangalore Metropolitan Transport Corporation (BMTC); Commissioner for Agricultural Marketing; Deputy Commissioner of Kolar district and Chief Executive Officer of Zila Panchayat of Bangalore Rural District.

He is the recipient of 16 awards as the MD, including two international. He was awarded ‘Namma Bengaluru’ Award (2012) for outstanding contribution to the Indian society. He is credited with setting up the Farmers Bazaars (‘Raithara Santhe’) ensuring fair price for all in Karnataka. He revolutionized the Agricultural Produce Marketing Committees (APMCs) through computerization and information technology. He is also on record for being instrumental in fostering communal harmony in the district of Kolar when he was the D.C.

He has over 40 years of experience in planning and executing base line and evaluation studies; uses mixed research methods – qualitative and quantitative approaches to evaluate program impacts. He is an author of ‘Human Development in India, Challenges for a Society in Transition- 2010’, Oxford University Press.